My last days in Laos

The ride from Vang Vieng to Vientiane was a case for the top gears. A little sad I left the mountains behind me. The closer I got to Vientiane the more traffic I had to share the road with. I decided to hitchhike the last 40 kilometers because it was getting dark. After I stood there for about half an hour without a car stopping, a couple picked me up because it just started to rain pretty heavy. They had a pickup truck full of bananas which they were about to sell at a market in Vientiane. They didn’t speak any English but we seemed to get along just fine. Then the woman decided that she needed a translator and called up her friend. The communication wasn’t much easier with her friend on the phone, and for some reason I still don’t quite understand they turned the car around and rode back to a restaurant where her English speaking friend was drinking beer. 15 minutes later they started the car again and were finally driving towards Vientiane. My translator sat next to me and asked me for the tenth time where I will stay in Vientiane and for the tenth time I told her: no hotel, friends place. Still 30 kilometers from the capital city they told me that now it’s too late for them to sell their bananas, so they will go back to their village. For a ridiculous amount of kips they offered to give me a lift to Vientiane. Very angry I got out of their car. I didn’t tell them to fuck off, but I hope it was written on my forehead.
While we were going around in circles the sun set and now I was surrounded by pitch black darkness, only the dim lights of some little stalls and the floodlights of the cars lit up the road. It was too dangerous to cycle. I started to wave my arms at the passing trucks but none of them took notice of the fallang that was standing at the side of the road. Just as I was about to give up and pitch my tent somewhere a car stopped and a young guy gave me a lift to the center of the city.
Very tired I reached the place of Ceci and Celine, two couchsurfers from Argentina and France that are living in Vientiane. The two girls were so nice and their couch incredibly comfortable that I didn’t want to do much more than just chill, chat and eat.
In the evening of the second day I cycled to the bus station. With my bicycle tied to the back of a bus I fell asleep in Vientiane and woke up in Pakse.
Right now I’m in Don Det, one of the 4000 little islands in the middle of the Mekong. It’s a beautiful and quiet place, perfect to lie in a hammock and read a book, cycle around the island and swim in the Mekong.
Tomorrow I will cross another border. This time it will be Cambodia on the other side. 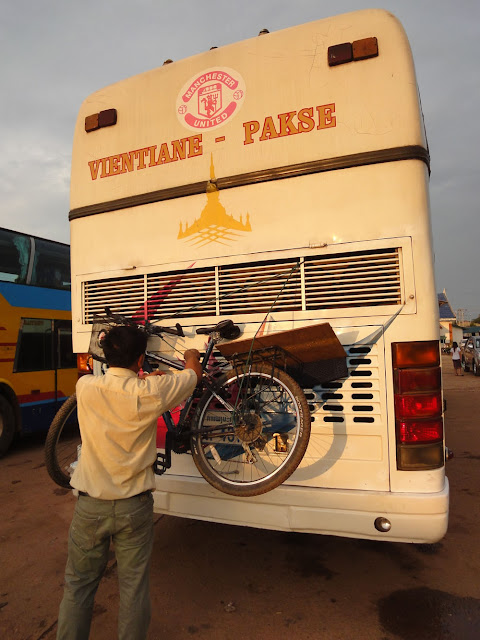 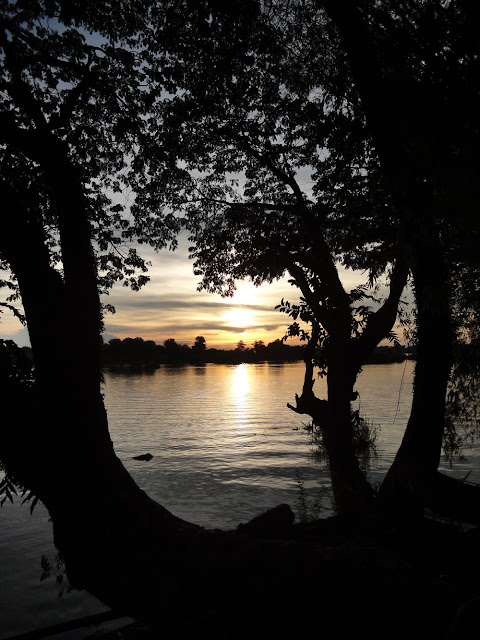 Five days I stayed in Luang Prabang, gave my muscles a rest, my bicycle pants a good wash and hung out with some fellow travelers. The days were hot and just relaxing seemed to be the most sensible option.  One evening Roger, a Spanish guy, and I managed to go sightseeing and met a 24-years old ex-monk who was just “released” from the temple and was enjoying his newly gained liberty by checking out the girls that were passing by. The next day he showed us some sights in Luang Prabang and set an end to our days of just lazing around.
15 coffees, 40 bananas, 2 beers and a few noodle-soups after arriving in Luang Prabang I was ready to leave again. A cyclist who I ran into on my way to Luang Prabang warned me about the journey ahead and backed up his words with an altitude profile he showed me. There were 2 scary looking hills coming up. It took me 3 days to get to Vang Vieng. 3 days that, besides the long sweaty climbs, offered me some of the most stunning views and some long downhill rides. Whenever my bicycle tripled its speed without me doing anything my mood went from great to fantastic and I sang along with the song that was playing in my head.
The mornings were beautiful. The valley was covered in a sea of clouds and only the mountain tops were glittering in the sun. The air was still cool and it was quiet. The villages came slowly to life. People trickled out of their houses and disappeared in the fields and kids with sticky rice in their hands were walking to school. Each turn of the road offered me a more spectacular view of the mountains.
Arriving in Vang Vieng was a little bit shocking. On my way here, whenever busloads of tourist passed me (there were MANY of them), I wondered: Where the hell do they all go? Now I know: They all have a jolly good time in Vang Vieng. They wander about the streets in their skimpy dresses, showing off flesh (nice or not so nice I let them be the judge of it), get drunk on dirt-cheap (for them) Lao beer and say things like “protein just makes me too big”. Because I didn’t fancy swapping tales with them about how drunk I got while I was floating down the river on an inner tube (which is one of the attractions here) and collecting new facebook friends, I successfully avoided them and had a jolly good time on my own. I’m the antisocial anti-consumer. 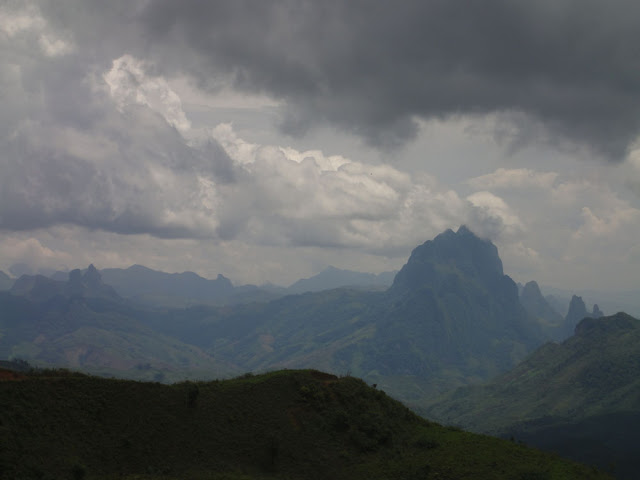 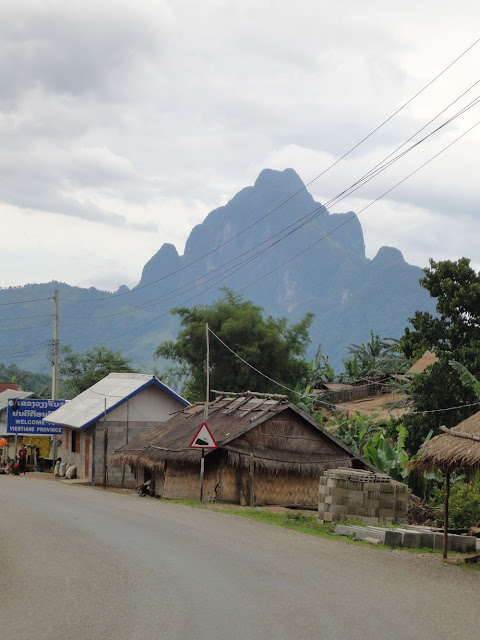 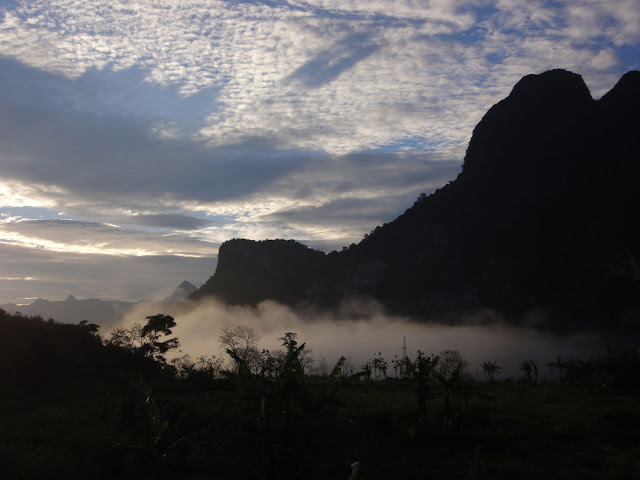 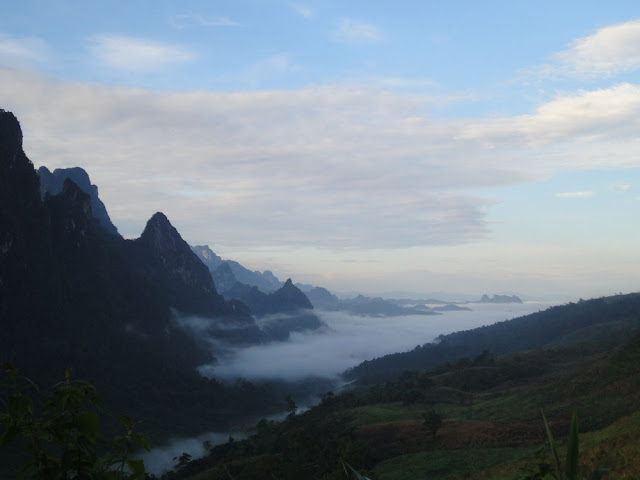